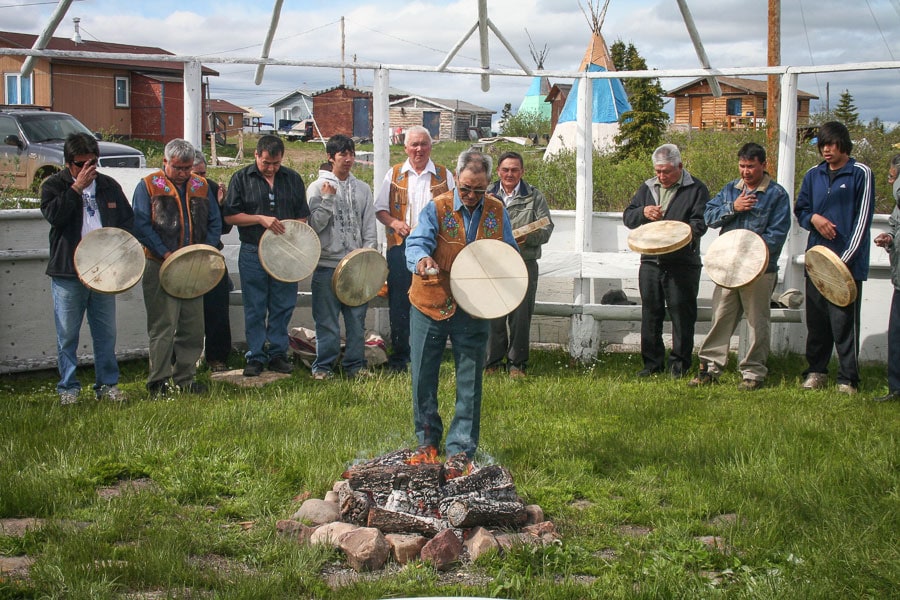 September 1, 2016, is the effective date of the Deline Final Self-government Agreement, the agreement (modern day Treaty) which established the Deline Gotine Government, Canada’s first and only community-based Aboriginal public government, located in Deline, Northwest Territories. Deline is a small Dene community (population 550) situated along the shore of Great Bear Lake in the Sahtu region of the Northwest Territories.

Over the coming days, there will be no shortage of news coverage on the Deline Self-government Agreement and the Deline Gotine Government. I won’t repeat all of the factual information in my story, as this is already publicly available on many websites. (For a comprehensive overview of the Deline Final Self-government Agreement and the negotiations history, visit here.) Instead, as a negotiator for the Government of the Northwest Territories and a friend of Deline, I will share with you my personal experience with the self-government file and the community, as well as a collection of photos and video clips. 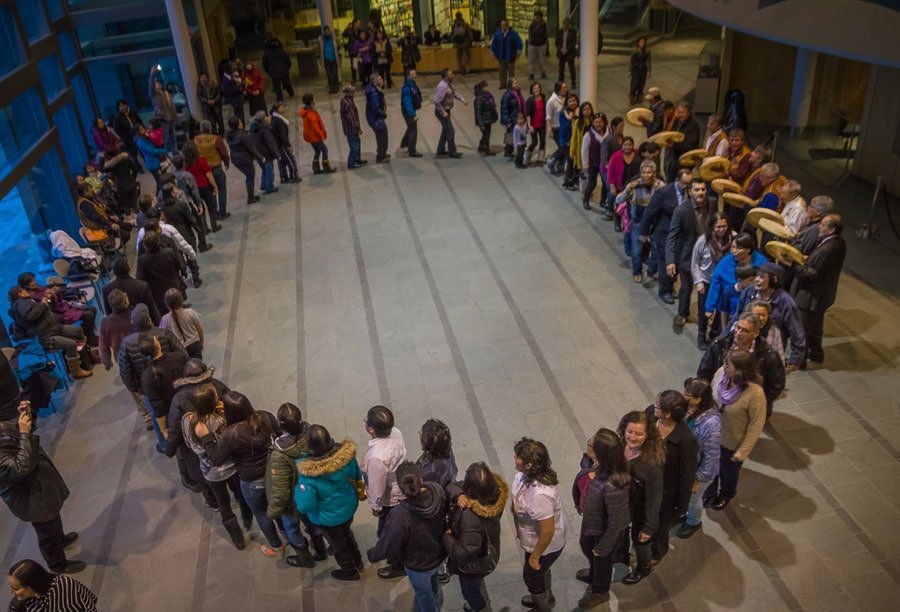 I have been involved with the Deline self-government file in different capacities since the beginning of my negotiations career in 2007. Even when I was no longer assigned to the file, I maintained a personal connection with the people and community and made efforts to visit with them and celebrate various milestones. In July 2015, I traveled back to Deline from Italy (while on a year of leave from work), and attended their community celebration for the signing of the Self-government Agreement. Next week I will be taking a short holiday to attend the Effective Date celebrations in Deline; my dancing slippers and camera ready to go! I wouldn’t miss this for the world! (And besides, the Deline folks put on the best celebrations!)

The Deline Final Self-government Agreement is the product of 18 years of negotiations between the Deline Land Corporation, Deline First Nation Band, Government of Canada and the Government of the Northwest Territories (GNWT), which began in 1997. The Agreement builds upon the Sahtu Dene and Metis Comprehensive Land Claim Agreement where the parties agreed that the Sahtu communities (Deline, Fort Good Hope, Colville Lake, Tulita, and Norman Wells) could negotiate self-government at the community level. Deline is the first of the five Sahtu communities to finalize their self-government agreement, while the other four communities are at earlier phases in the negotiation process. (I am currently the GNWT negotiator on the Tulita and Norman Wells self-government files, both of which are at the Agreement-in-Principle stage).

The Deline Gotine Government will be responsible for the functions of a municipal government and will have law-making powers over many of the same areas as the GNWT has, such as education, adoption, language, culture, marriage, social housing and income support. The Deline Gotine Government will not take on all of these responsibilities right away, instead they will build capacity, the GNWT will continue to provide programs and services as before, and they will exercise jurisdiction when they are ready.

In January 1997, at the very start of self-government negotiations, Danny Gaudet became Deline’s first (and only) Chief Negotiator; he believed it would take only two years to reach an agreement. Little did he know that he would be wedded to this process for 18 years, during which he remained fully committed to his people and community. Danny is well respected not only in his community, but also across the Northwest Territories and beyond.

Over the years Danny has become a good friend and confidante of mine. While we represent two different governments and we often had (and still have) heated debates, at the end of the day, we’ve always been able to put those aside and move forward together. The Northwest Territories is just as much my home as it is his (I was born and raised in Yellowknife), and our governments are in this together to create a better future for tomorrow for all residents.

While negotiation team members for the federal and territorial governments have changed many times over the years, the membership of Deline’s self-government negotiation team has remained consistent. Undoubtedly, this is why their team is so strong, cohesive and coordinated.

Some of My Memories…

My first visit to Deline was in May 2007, only a couple of months into my new career as a negotiator (Assistant Negotiator at the time). During that first visit, I immediately sensed something special about this community and its people. I’ve been living in the Northwest Territories my whole life, and I’ve visited nearly all of the 33 communities. With no disrespect to any other community or Aboriginal group in the Northwest Territories, Deline has by far made the greatest (positive) impression on me and I always look forward to returning. 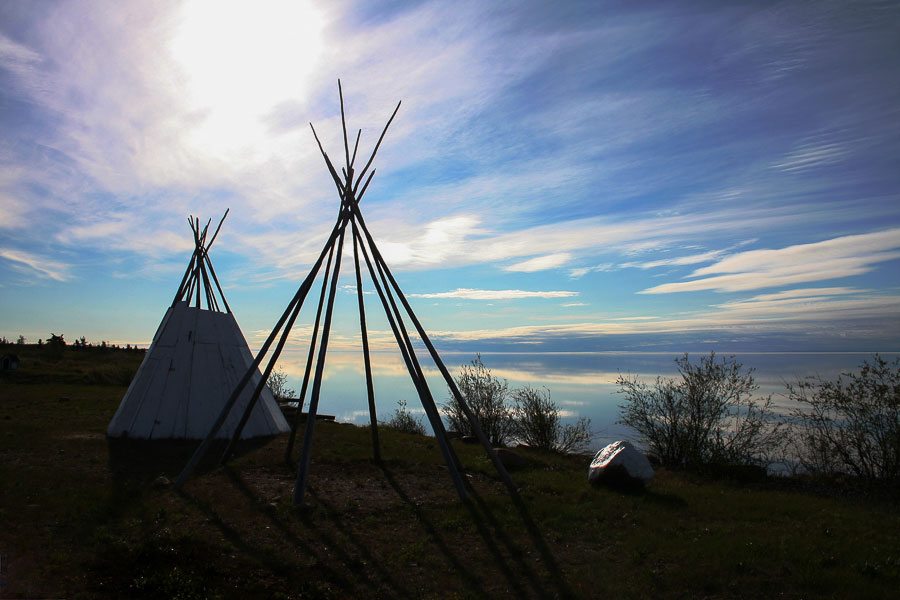 I’ve been to several feasts, cookouts and countless drum dances and hand games. There is nothing like the sound of the Deline Dene Drummers and dancing to the beat of their drums! It is such an exhilarating way to connect with their culture (and burn a few calories while you’re at it!) You will find several more videos on my youtube channel.

During one of our main table negotiation sessions in Yellowknife, I had the negotiation team over at my house for a Chinese food feast. It was during the Christmas season, the tree was decorated, the fire was burning, and people took turns playing the guitar and singing songs. I have such fond memories of that night, and that was back in 2007! 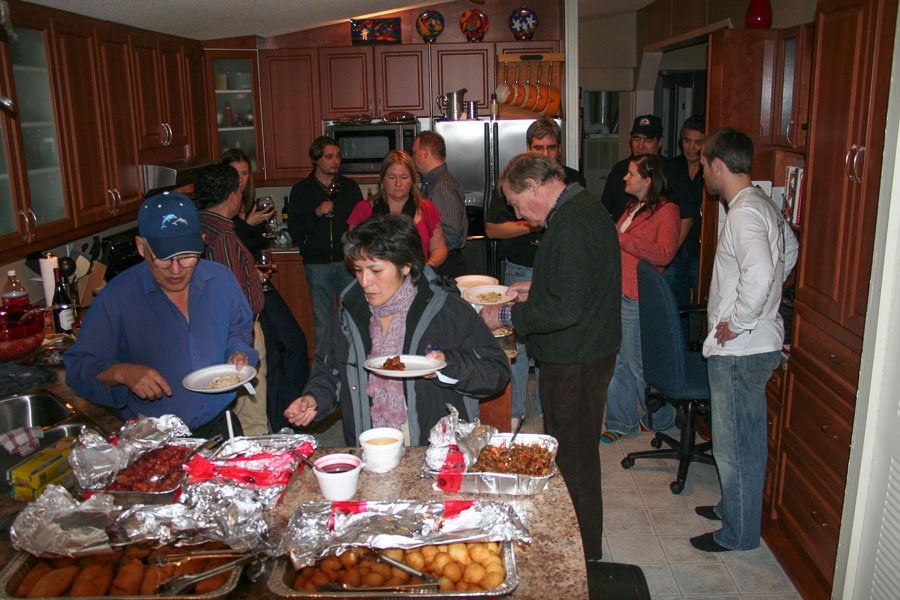 In August 2009, I was visiting Deline during their annual Spiritual Gathering. This is when I met Hughie Kenny. He asked me if I wanted to go for a boat ride and I jumped to the opportunity! What happened? Watch this video to find out…

In March 2011, I attended my “final” main table negotiation session in Deline, in my capacity as Senior Negotiator (I had been assigned to a different self-government negotiation file). It was incredibly emotional for me, as I didn’t know if or how I would remain connected to the file, the community and the people. I didn’t want to say my goodbyes, but at least I had the opportunity to meet with the members of the Deline team, whom I grew so fond of.  I made each of Deline’s negotiation team members a thank you card, each with a different photograph I took from various stages of the negotiations.

During that final negotiation session, I was overwhelmed when I was presented (four times!) with thank you and farewell gifts from different members of the Deline team. I had the beautiful beaded mitts and moose hide slippers and purse mounted in a large shadowbox frame and it is proudly hanging in my office. Morris Neyelle made me a replica fishing spear, which he called my “man spear” so I could catch some men! (Such a funny guy!) 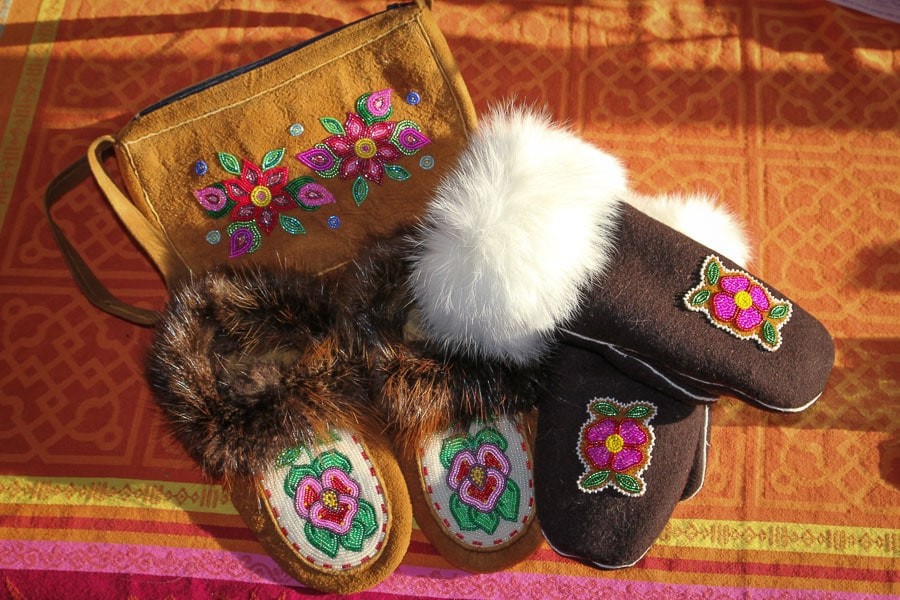 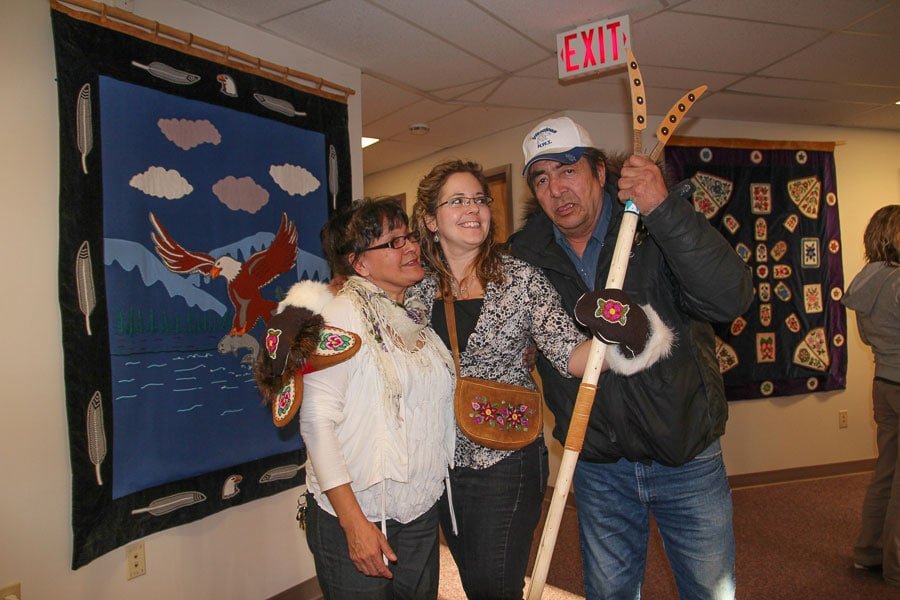 No matter why I am in Deline, the people always make me feel welcomed. If you ever get a chance to visit Deline, be sure to get out on Great Bear Lake, home of world trophy trout! You’ll be especially lucky if you can get your hands on some “fish sticks” (thin strips of smoked trout).  Mmmmm, mmmmm, mmmmmm!  Also, be sure to inquire about getting a pair of moosehide-beaded slippers made for you; the Deline beaders are among the finest in the Northwest Territories! And for those of you who are hockey fans, did you know that Deline is reportedly the birthplace of hockey in Canada??  To learn more about the community and the surrounding area, visit here.

The people of Deline are among the kindest and warmest that I know and I am privileged to have had the opportunity to work with and learn alongside the Deline negotiation team. Land claims and self-government negotiations are not for everyone. They can be challenging, emotional, and stressful, and may sometimes cause you to question your career choice. But if you’re a people person and are willing and open to connect with others (and I mean at the individual level, not negotiator to negotiator), being a negotiator can be an incredibly satisfying and fulfilling career. I never once thought that I would be involved in this line of work and so far I’ve been negotiating since 2007!

For a Little Laugh… (please don’t judge my jigging abilities:)


I wish to congratulate all of the people involved in making the Deline Final Self-government Agreement get to this point and become a reality, and special thoughts go out to the families of former team members and community leaders whom have since passed on.  Most importantly I wish to congratulate Danny Gaudet and the members of his negotiation team (Charlie Neyelle, Leo Modeste, Alfred Taneton, Fred Kenny, AJ Kenny, Dolphus Jumbo, Morris Neyelle, Raymond Tutcho, Leonard Kenny, Peter Menacho, Patricia Modeste, Jane Modeste, Stephanie-Irlbacher-Fox, Alex Ker and others!) for their perseverance and commitment. You’ve made a forever mark in the history of your people, and the future is bright and promising.

Comfort and Care for our Senior Paralyzed Dog with Degenerative Myelopathy – Tika’s Story – Part 1
May 18, 2021

Day of the Dead in San Miguel de Allende, Mexico!

Here is just a sneak peek! And many more to come!!

(⭐️Swipe) Day of the Dead in San Miguel de Al

Walking through the colourful streets of San Migue

Walking through the lively Centro of San Miguel de

(Swipe!) Wandering through the Artisans Market in